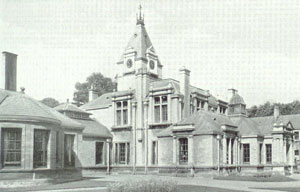 The Warneford was not founded by Samuel Warneford, as generally believed. In 1810 John Vye, the vicar of Wootton in Northamptonshire, gave the Radcliffe Infirmary 100 guineas (£105).  He specified that the money should be used towards ‘the establishment & support of a Lunatic Asylum, when such shall be built’ in Oxfordshire.  The Infirmary Governors accepted the trust and the responsibility, the rest of the money was raised by public subscription, and the hospital finally opened as the Radcliffe Asylum in 1826. It was renamed the Warneford in 1843 in honour of its greatest benefactor Samuel Wilson Warneford (1763-1855), who gave property and cash to the value of over £70,000 to the Asylum during his lifetime.

The hospital was a paying hospital for the middle classes, although in due course a fund for poor patients was established as well. Men and women were strictly segregated, with a male side of the hospital and a female side, and this continued until the late 1950s.

The Warneford Committee of Management purchased surrounding land at every opportunity and eventually there were about 150 acres. Indeed in 1926 the Annual Report records the building of a pavilion for shelter as patients could not get back to the hospital if it started to rain when they were at ‘the far end of the grounds’. The Warneford site has now returned to its original boundaries, more or less, but some of the extent of the estate can be seen in the Churchill Hospital, built entirely on land originally purchased by the Warneford. The extensive grounds were not only regarded as pleasure and exercise grounds for the patients but they also provided flowers for the hospital rooms and fruit and vegetables for the table. 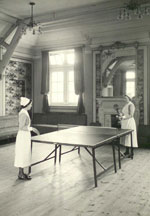 After World War II the Committee had to decide whether or not to join the National Health Service. They realized that if they remained independent they would have to increase their charges so much that those for whose benefit the hospital had been founded, the middle and professional classes, would not have been able to afford it. After 122 years as a fiercely independent body the hospital passed into public hands. It had its own Hospital Management Committee until 1968, when it was united with the Littlemore Hospital under the Isis Hospital Management Committee. Both hospitals became part of Oxfordshire Area Health Authority (Teaching) in 1974, Oxfordshire Health Authority in 1982, Oxfordshire Mental Healthcare NHS Trust in 1994 and Oxfordshire and Buckinghamshire Mental Health NHS Foundation Trust in 2008. They have been part of Oxford Health NHS Foundation Trust since 2011.

Records of the Warneford Hospital

The Warneford Hospital is featured in these Tales from the Archives: