It was reported that one patient had complained of the food in the hospital. The other patients when asked said the food was excellent, and the committee member was unable to discover any real reason for the complaint and was convinced it was simply that the food was different from what the patient was used to, which seemed to be mainly “fish and chips”‘.

We all like to complain about the food which others have prepared for us; remember school dinners? On 26th November 1874 the patients at the Littlemore Hospital complained when they were offered Australian meat and potato pudding made with unpeeled potatoes. This was probably canned meat, as Australia was an early leader in commercial canning. The report of the Commissioners in Lunacy’s visit to Littlemore in 1874 noted that ‘the Australian meat is generally unpopular, though the pudding was well made and good of its kind. We were told that when this meat has been given, in the summer, cold, with lettuce and mint sauce, it had been liked. It might possibly be more appreciated if given, at this time of year, cold, with pickled cabbage and potatoes.’

The need to provide good food within a limited budget is not a new problem. A letter in the Warneford Hospital archives dated 6th January 1828 stresses the need to reduce expenditure because the payments of the patients were inadequate to their support. At that time patients were divided into superior, second and third classes according to the amount they could pay, and one of the official visitors of the Warneford was concerned that ‘it is obviously wrong to feed the poor Patient upon Veal Beef Mutton & such diet as may suitable to persons in the higher ranks of Life’. Mr Moore, the Superintendent, was instructed ‘to furnish the third class of Patients with meat four times a week only and on the intervening days with soup of peas and other vegetables which will not only supply a wholesome and nutritive but pleasant and at the same time economical diet’. It is not altogether surprising that there was not enough meat for the patients; when Mr Moore was dismissed for ‘culpable conduct’ later that year one of the offences mentioned was that of feeding the patients’ veal to his dog! 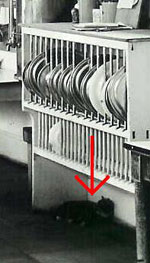 Patients at the Radcliffe Infirmary in the early nineteenth century were forbidden to have any food not provided by the hospital. In 1843 Hannah Pusey’s brother brought in some clean clothing with apples concealed in the bundle, and it was suggested that the Porter was being negligent ‘when persons are allowed to bring in Bundles unnoticed’. One result of such smuggling was that the patients’ boxes (equivalent to today’s bedside cabinets) ended up containing rotting food: ‘I have seen Bread Cheese Butter, Lard, Cakes, Bacon, Apples & Pears, bones of Beef, slices of meat &c &c lying in these boxes with foul as well as clean linen producing a villainous compound of foul smells.’ In modern days this would probably attract the attention of the Food Standards Agency, as would the presence of a cat in the Warneford Hospital kitchen (pictured in 1938).

The following menus are offered to those who feel like complaining about modern hospital fare. 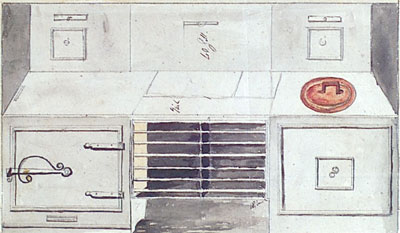