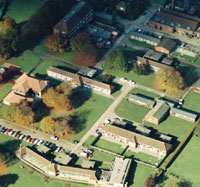 The Slade Hospital was built by the Oxford Corporation as a replacement for Cold Arbour, the main figure in the initiative being Dr Geoffrey Commeline Williams, the Medical Officer of Health for Oxford 1930-1947.

The hospital was opened early in 1939. As the demand for isolation facilities decreased the Slade began to take on other specialities like dermatology, under the administration first of the United Oxford Hospitals and then of Oxfordshire Area Health Authority (Teaching) and Oxfordshire Health Authority.

In 1986 two thirds of the buildings were adapted for the use of mentally handicapped patients formerly resident in other Oxfordshire hospitals.

Oxfordshire Learning Disability NHS Trust was formed in 1994, as part of the Ridgeway Partnership, where it remained on site. The Ridgeway Partnership was acquired by Southern Health NHS Foundation Trust on 1st November 2012, then transferred to Oxford Health NHS Foundation Trust in July 2017. It is now based at the Littlemore Mental Health Centre.