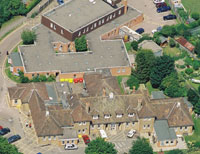 Wantage Cottage Hospital opened on 1st February 1886 in Belmont. Two wards, and an out patients surgery were opened in July 1906 and a new hospital in Charlton Park was opened in June 1927. It became part of the NHS in 1948 and was administered by the Oxford and District Hospital Management Committee 1948-1956 and by the Nuffield Hospital Management Committee 1956-1974. Responsibility passed to Oxfordshire Area Health Authority (Teaching) in 1974, Oxfordshire Health Authority in 1982, Oxfordshire Community Health NHS Trust in April 1994 and South West Oxfordshire Primary Care Trust in 2001, and then to Oxfordshire Primary Care Trust. It is now run by Oxford Health NHS Foundation Trust as Wantage Community Hospital.

A history of the hospital to 1927 can be found at www.wantage.com/museum/Local_History/local_history.php