‘Gentlemen, In consequence of the violent abuse I received from Martha Kent, of whose conduct towards a female patient I thought it my duty to complain, and the shameful assault committed here, by one of the keepers, upon a tradesman, a few evenings ago, I have felt it necessary to absent myself from the Asylum for a few nights’.

This is the opening of a letter from a resident medical officer to a hospital committee, complaining about two of the staff. It was sent to the Committee of Management of the Warneford (then the Radcliffe Asylum) by Frederick Thomas Wintle, the Resident Apothecary, on 15 October 1828. Wintle was responsible for the day to day running of the asylum, assisted by two female nurses, two male ‘keepers’, a cook and a housemaid. The overall responsibility was in the hands of the Resident Director, Mr Moore, but it is clear from the rest of the letter that Frederick Wintle did not expect any help from that source.

‘Mr Moore does screen the faults of the servants & as it were consents to their bad conduct, for in the case of Martha Kent he stood by & heard her malignant abuse towards me at two separate times without saying one word to reprove or dissuade her, therefore I cannot expect the least protection from him should any of the servants be disposed to assault or abuse me which I conceive is not unlikely as they know I am opposed to, & have exposed, much of their ill conduct. I beg also to be allowed to continue to absent myself at night until the Committee shall have ordered some means for my security.’ 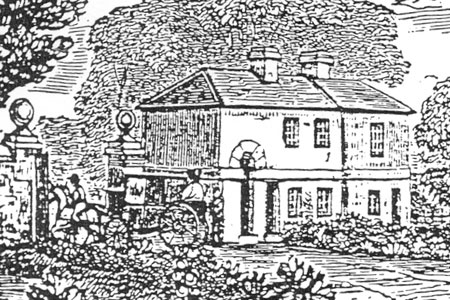 The Committee had been unfortunate in the matter of the Resident Director since the opening of the asylum two years before. The first to be appointed was a Mr Bakewell, the son of a well known keeper of a private ‘madhouse’, as they were known, in Staffordshire. However, he lasted only two months, being ‘pronounced unfit for the situation of Superintendent owing to his state of mind’. This is intriguing in view of his position as head of a psychiatric institution, but no further details are given. Mr Moore was the next appointment, man who had gained much experience in the London madhouses.

It is not always the case that a committee will uphold the complaints of an employee, but Frederick Wintle was on safe ground, for when he wrote his letter both Mr Cummins, the keeper who had assaulted the tradesman, and Mr Moore, the Resident Director, were already under notice to leave. Mr Moore had kept the books badly, used the premises to fatten his own pigs and had fed the patients’ veal to his dog; he was dismissed for ‘culpable conduct’.

We do not know exactly what the Committee said in reply to Mr Wintle’s complaints, but we know that his fear of staying overnight in the asylum did not last. Two months later he was appointed Resident Director in Mr Moore’s place and he lived in the asylum until his death twenty five years later.